In the journey to becoming Cognac, from grapes to eau-de-vie, the distillation process is instrumental to the formation of the spirit’s identity in many ways. This page dedicated to Cognac distillation aims at providing a toolbox to understand the basics of distilling, but also the different approaches to distilling Cognac, that will influence the product’s final taste and profile.

To understand the principles of distillation, it is important to consider that alcohol basically derives from sugar. Sugar is the raw material that is transformed into ethanol – the chemical name for alcohol – through a fermentation process, that is the transformation of sugar into alcohol by the action of yeasts. There are different types of sugar, contained in fruits, plants, cereals (even wood as a matter of fact!) serving as basis for all known spirits.

As such, the distillation process does not directly produce alcohol but consists in concentrating the alcohol contained in a fermented liquid, while also separating it from other chemical components. This is achieved by leveraging the difference in boiling temperatures of the elements composing a fermented liquid. For instance, alcohol and water have different boiling points ( 78.3 °C / 173.1 °F for ethanol, 100°C / 212 °F for water) meaning that alcohol vaporises before water when heated-up to boiling point. 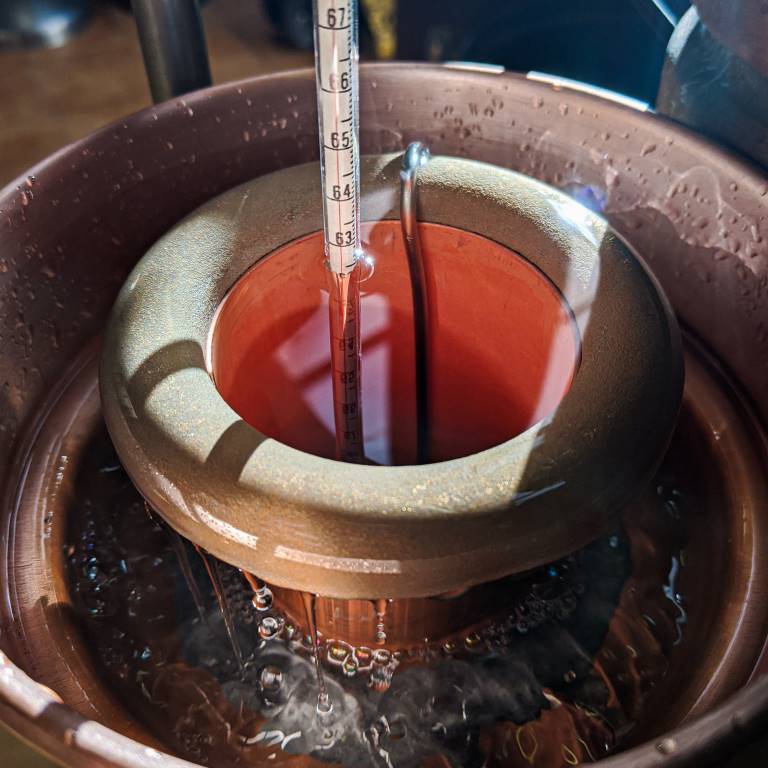 The traditional alembic used for distilling is heated either by flame or steam – firstly, the still is filled with a fermented liquid  such as beer, wine or cider in the first place. Upon reaching boiling temperature, alcohol vapours move upwards within the still then travel through the swan neck to reach the condensator, where vapors cool down and turn back to liquid. This process effectively concentrates the distillate in alcohol, reaching about 30 % ABV depending on the original strength of the fermented liquid.

To reach higher alcohol concentration, this distillation process will have to be repeated yet another time, using the distillate resulting from the first batch as primary material. This type of distillation is named batch distillation or discontinuous distillation because it takes two sequences to achieve the final product. Cognac, scotch and Irish whiskys are typically distilled according to this process.

More complex distillation apparatus like column stills are necessary to achieve higher alcohol concentration within a single batch of distillation. These alembics are made of several plates piled up upon one another – each acting as a mini still – giving the alembic the visual aspect of a column or a tower. Each plate communicates by means of valves enabling the passage of both alcohol vapors and liquid. The column is heated by steam from beneath, the fermented liquid is poured into the alembic from the top: it eventually trickles down the different plates, crossing ascending alcohol vapours along the way. The fermented liquid warms up on its way down, by contact with alcohol vapours which in turn, get richer in alcohol on their way up. As a result, the liquid is stripped from its alcoholic content upon reaching the bottom of the column while alcohol vapors become increasingly rich in alcohol on their way to the top, ready to cool down in a condenser.

Still columns operate with a constant feed of wine on one hand and deliver a steady stream of distilled spirit on the other – for this very reason, this process of distillation is named continuous distillation. The alcohol percentage of the final product will vary depending on the number of available plates, from 65 to 75% ABV for column distilled rum for instance, up to 96 % ABV for neutral grain alcohol used as basis for gin or vodka.

Distillation aims at concentrating alcohol, but also separating ethanol from other components. These chemical elements (esters, higher alcohols, fusel oils etc.) available in wines or mash after fermentation will represent a very tiny proportion of the final result but will play a major part in giving the spirit a specific taste profile – either positive or negative – depending on their type and concentration. Distillers will choose to keep some of these elements and discard some others, depending on the nature of the desired product, to a certain extent.

In continuous distillation, specific chemical components can be continuously drawn out the column along their way through the different trays, that will serve as concentration zones. As a result, and if the column offers sufficient tray capacity, great levels of “purity” can be reached using a column still. This essentially means that the distillate will highly be concentrated in ethanol and neutral in taste, once stripped from other chemical elements.

The choice of still and distillation boils down to the final product’s desired characteristics, the quality of raw materials (wine, mash, cane etc.) but also based on expected volumes as columns have larger production capabilities. This said, Column stills are more complex to manoeuvre and represent a bigger financial investment compared to traditional pot stills. 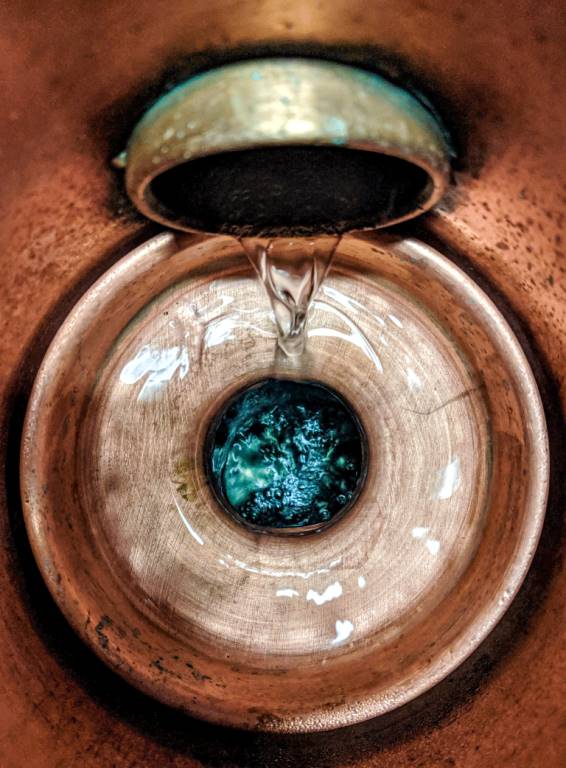 If you have read our article about making cognac, you will know for a fact that Cognac is a spirit made from wine, distilled in two batches in a Charentais copper pot still. In the region, we talk about “double distillation” which is a similar process to scotch whisky, Pisco or some Brandies. However the Charentais pot still, “Alambic Charentais” or “Chaudière” has its own a distinct identity and idioms:

In Cognac distillation, the first batch or “Chauffe-de-vin” (literally wine heating) produces a distillate named “brouillis” – because of its cloudy appearance – reaching about 30% ABV. Once the first batch is completed, the pot is loaded with the brouillis for the second distillation named “bonne-chauffe”, producing the “eau-de-vie” (french for spirit) that should not exceed 72% ABV according to the cognac AOC Guidelines. This second distillation has to be performed in stills not exceeding 25 Hectoliters (2,500 liters) whereas the “Chauffe de vin” can be done in larger stills, typically 50 Hectoliters.

Cognac distillation is seasonal and can only be completed during a specific period of the year, ranging from the start of harvests – usually in October – to march 31st of the following year. This guarantees that wines keep as fresh as possible, since sulfites are not allowed in the Cognac AOC guidelines.

Although the general distillation process is harmonized in the Cognac region, variations in Cognac styles exist from one Cognac producer or top house (Hennessy, Martell, Courvoisier, Remy Martin) to another. These variations depend on the  distilling methods promoted, mostly differing in the way the “imparfaits” – french for imperfects, which designates heads and tails in Cognac distillation – are re-incorporated into the distillation process.

Martell distillation for example requires both heads and tails obtained from the Bonne Chauffe – or second batch – to be recycled to the first stage of the process and redistilled with wine. A rather important volume of heads is collected at the beginning of the bonne-Chauffe. Martell distilling style stresses the lightness and finesse of their eaux de vie. Hennessy distillation method distinguishes 4 fractions in the distillation cycle – in addition to heads and heart, the tails are broken down into two categories: “Secondes” and “queues”. The secondes will be distilled with the brouillis for the Bonne-Chauffe – or second batch – while the heads and queues will be recycled with wines.

Another important aspect to those different approaches of distilling is the heating curve followed to run the distillation process. The heating curve essentially is the level of gas pressure applied, determining the heating intensity which in turns, sets the pace of the distillate output at the other end of the still. This pace is critical when separating different fractions: the distiller generally wants to make sure this is done as accurately as possible, hence slowing down the output when approaching the cut point. Different houses however use specific heating curves both for first and second batch, which determines the output of distillate but also the overall length of the distillation process.

To Lees or not to Lees?

One major difference in cognac distillation styles arises from the incorporation of lees to distillation wines. Lees are a solid layer of yeast particles naturally forming – once the fermentation process is achieved – at the bottom of wine vats.

In Cognac distillation, lees are proving tricky to handle first because they do not conserve well and need to be carefully kept from air contact. Lees also cannot be distilled on their own in Charentais pot stills and must be incorporated in small quantities to clear wines – wines stripped from their lees – to prevent them from sticking to the bottom of the pot. If done wrong, this could result in the forming of a burnt layer, greatly compromising the spirit’s taste and quality, and potentially damaging the pot still itself. If handled correctly however, distilling on lees brings great fullness and complexity to cognac eaux-de-vie because of their natural richness in esters and aromatic components – think fruity, tangy, candy like notes. Moreover, eaux-de-vie distilled on lees prove to have great maturation potential as fatty acids are instrumental in the development of the charentais rancio for instance.

Cognac distillers have different approaches when it comes to incorporating lees – Remy-Martin is a big promoter of the practice – although for Grand Champagne, Petite Champagne and Borderies wines only – whereas Martell’s approach requires the removal of lees and the distilling of clear wines. This creates a diversity in cognac offerings, with unique profiles and identity.  As for ourselves, we do like to distill wine with lees for our range of Organic Cognacs!

When it comes to distilling Eau-de-vie and defining a style for our organic cognacs, our own preference goes towards roundness and aromatic complexity.

For that reason, we choose to keep the volume of discarded heads to a minimum but also to incorporate a larger share of tails to the heart, by operating a late cut. We call this distillation method “fatty distillation” because a wide spectrum of elements is incorporated to the final results amongst which, a fair share of aromatic esters and fatty acids. We pay careful attention to our organic wines as this method only is achievable with top quality wines. We believe this fatty distillation sets our eaux-de-vie apart by giving them great roundness and maturation potential, upon ageing in our second-fill oak barrels. For more information about Cognac maturation, you can read our article about Cognac ageing.